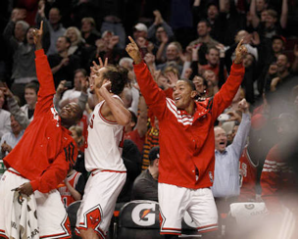 The last time the Chicago Bulls faced the Indiana Pacers, the Pacers handed them their first home loss of the season. Not only did the Bulls see their lead in the Central over the Pacers get cut to 2½ games but also got to see Pacers players dance on the court as if they won a playoff series. Derrick Rose and his mates did not appreciate it.

The normally quiet Derrick Rose spoke up on seeing the Pacers celebration. “I’ll never forget how they celebrated just from winning this game,” he told reporters after the January game. “I can’t wait to play them again.”

Ronnie Brewer echoed Rose’s sentiment on the Pacers. “We’re all competitors. They’re in our division. Every time we play them it’s a tough matchup. Especially in front of our fans, you don’t want to have a letdown and lose at home. To hear them do like that adds a little fuel to the fire. We talked about it after the game.”

For their part, the Pacers were a confident group after that win. Said Danny Granger, “I think a lot of people still don’t believe we’re as good as our record has shown. You got those six teams in the East fighting for those top spots and Chicago’s not even that far ahead of everybody else. I don’t think teams think we should be there yet. I think they won’t be convinced until 30 games left in the season when we’re still there.”

Flash forward a little over a month and the game Derrick Rose was waiting for arrived. The Bulls are still on top, and their lead over the Pacers has grown to 6 games.

The Pacers were still pretty confident, having won 6 in a row. They were looking for their first 7 game winning streak in 8 years. The Bulls stopped all that.

Give credit to the Pacers. They hung in tough in the first half and actually had a lead at halftime. They held Rose to just 2 points and were thinking they could steal another one. Then the second half started.

The Bulls clamped down on defense and revved up the offense. They outscored the Pacers 33-13 in the decisive third quarter. Rose scored 11 points and had 5 assists in the quarter, including 3 treys. He also had the entire fourth quarter off. The Pacers could not handle the Bulls’ stifling defense, only shooting 6-22 in the third quarter.

“Give credit to the Bulls,” Pacers coach Frank Vogel said. “They had all the hustle stats. Won all the loose balls and obviously kicked our butts on the glass.”

There was no dancing by the Pacers on this night. Derrick Rose got the revenge he was looking for against them. There is a certain team from South Beach that comes to Chicago to learn what the Pacers learned: DO NOT UPSET DERRICK ROSE!

Posted by CineSportsTalk on March 6, 2012 in Basketball, Carlos Nazario, Sports